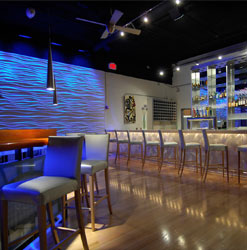 202 Market, Roanoke, VA
During 2006 and the early part of 2007, Roanoke’s downtown market area was under construction with several new projects underway. One of the larger changes was the debut of 202 Market, a fine dining and evening entertainment establishment that would occupy the space vacated when Books, Strings, & Things left Roanoke. The owners asked us to work with the design and construction team to create a space for dining, special events, and live music that had never been seen in Roanoke before then. Working with the interior design team, we helped create just the right atmosphere using LED and fiber optic color washes (like the one seen on the wall in this photo) as well as two complete live music venues, several dining rooms that could double as meeting / banquet spaces, and a large videowall that could be seen by vehicles and pedestrians as they passed by the building. 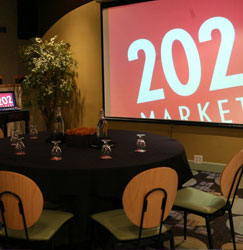 The first floor contains the main live performance space as well as a large bar and several intimate seatings areas for dining and relaxation. The digital sound control system and a high-output sound system is capable of providing quality sound for musical performances, comedians, and disc jockeys on a nightly basis.

Since our original installation, 202 Market has asked us to design and install additional systems as their needs evolved. We installed a video mixer when they added a video jockey to entertain the clientele. We augmented the lighting system on the main level when dance nights with a disc jockey became a regular part of the weekly schedule. We’ve made program changes to the lighting system several times to reflect the changed requirements for the special events hosted in the facility. 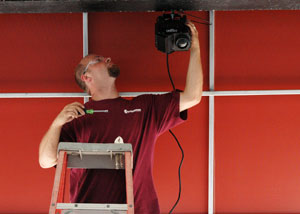 About a month ago, we were asked to install a complete sound, lighting, and video system for their outdoor patio area. the lighting system included miniatire laser lights as well as LED special effects lighting fixtures. In this photo, you can see Brian attaching one of those lighting fixtures to the underside of their awning. While you can’t see them in this photo, all of the loudspeakers are weatherproof for long lasting operation.

If you find yourself looking for some great food or entertainment, you should stop by 202 Market and join in on the fun!