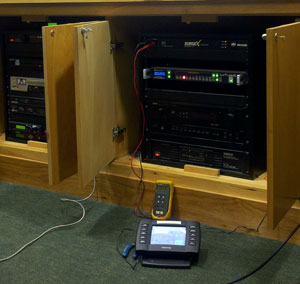 Shaw Technology Classroom, or simply “Shaw Tech” as known by students and faculty, is Chatham Hall‘s primary technology classroom on campus. This classroom features seating for about 40 students and includes a video projection system, streaming video and audio for distance learning, video recording using multiple remote controllable pan-tilt-zoom video cameras, and provisions for multiple computer and video inputs. In addition, the system is capable of providing source playback through a stereo sound system as well as amplification of a teacher’s voice through overhead ceiling loudspeakers. In this project, we were asked to upgrade the existing system by replacing a broken video matrix switcher and re-writing the Crestron control system to make the system a lot easier to use.

At the heart of this new system, we replaced the old matrix switcher and a bunch of unreliable video converters and interfaces with an Analog Way Smart Matrix LE scaled seamless switcher with dual outputs. You can see this switcher near the top of the equipment rack in the photo – the device with the blue LCD display and the red and green illuminated buttons. By using this switcher, we were able to scale (convert) any of the computer and video resolutions used in the room to the actual native resolution of the video projector. In addition, this switcher includes a second scaled output that allows the same or a completely independent video source to be sent to a future video recording or video streaming system. This approach provided better video quality (the scaling engine in this switcher is excellent!) while improving the system reliability since many of the cables and interfaces in the old design were removed for a simpler and more easily controlled “brain”.

Andrew, our chief Crestron programmer, also re-wrote the entire Crestron control code to simplify and remove the bugs from the previous system. You can see the touchpanel at the bottom of the photo – it looks like Andrew was testing out some of his software code since he has a multimeter measuring the power output from the surge suppressor and the touchpanel is temporarily sitting on the floor in front of one of the equipment racks…